what makes the lyrics tick

When I was a kid I had a great interest in old black and white horror films and science fiction. The lighting and cinematography in many of those black and white films was exquisite, and indeed created another dimension in which one could explore. I did a lot of reading as well. Fiction would include Bram Stoker, H.P. Lovecraft, Mad Magazine, and George Orwell's 1984. Reading Orwell and seeing films like Fritz Lang's Metropolis, M. The Murderer Walks Among Us, and Things to Come set the stage for my discovery of Anthony Burgess' A Clockwork Orange. I first read it in '73, when I was 13. My immediate reaction was "I know these people." Of course I knew these people without the artistic affectation of clever lingo and costume, but every other aspect was on the money!

I remember the summer of '68 like it was yesterday. At school I was in the second grade and there was a kid in my class named Jimmy Cassidy. Jimmy and I got along well; he was a big kid, taller than the rest of us. One hot afternoon we were playing in Randall Park across the street from my apartment building in Freeport. Suddenly in the distance we heard the deafening roar of rolling thunder! Closer and closer it came! It was seven of the wildest looking cats I had ever seen riding what I now know to be flathead bobbers and panhead choppers.

They jumped the curb, rolling over and tearing up the grass as they slid right past the Keep Off the Grass sign. The guys hopped off of their bikes, dumped their helmets and within 30 seconds were playing handball with these cute 16 year old chicks who didn't bat an eyelash. These were guys in their 20s, 30s and 40s, and no one flinched. On that day -- in that time and space -- it was normal. My reaction? "WOW! Jimmy, check it out." Jimmy looked down and said, "Yeah, that's my old man." Mr. Cassidy was one of the guys around 40. Jimmy walked over to him, and without taking his eye off the ball or missing a shot they exchanged a few words. Jimmy came back, said nothing, and we were back in our own world.

An incident in the park two weeks later got me out of town. I was standing in front of the apartment building which sat on a three foot elevation above the street. A short piece of rolling lawn went from the elevated grade to the sidewalk. I was getting ready to cross over to the park, talking to my friend Richie, when something caught our attention. It was an argument between a cute girl with long dark hair and her boyfriend. I now know that she was probably hopped up on speed by the rapid fire delivery of her shrill voice. She was screaming at him, saying, "You were going to buy that for me, blah, blah, blah...!" She pulled out a knife and with quick reflexes he slapped her hand away and yelled "Fuck off!" He turned to walk away and WHAM! She stabbed him directly below his left shoulder, and left the knife stuck there. He spun, dazed, walked out of the park and crossed the street. He tripped on the curb on our side and crawled up the elevated lawn toward us mumbling "that bitch..." It was a slow motion drama and the blood was really flowing. My mom came out to see what the commotion was, grabbed me by the arm, and the next day drove me up to Maine to spend the rest of the summer with my Grandmother and Aunt Re-Re, aka Marie. I never found out how the guy made out. Things happened fast, and were quickly forgotten.

Don't get me wrong, there was plenty of normal day to day activity, but everyone who had "something else" going on gravitated to the handball court at that park across the street.

My mother was especially freaked out as my dad, a field commissioned E-7 of the 279th. Rgt. Cbt. Team, Airborne Pathfinder, during the Korean War had gone off to Vietnam in '67 as a Merchant Marine to assist in dredging the Mi Tho River which empties into Cam Ranh Bay. Dredging operations were to pump fill from the river bottom to assist in the construction of an airstrip. We are back to A Clockwork Orange, as oh my brothers, there was a master plan!

Cam Ranh Bay is the largest natural deep water port in South East Asia. Esso was building the largest oil terminal to date in that region, which, as my old man says, rivaled Hitler's Atlantic Wall in concrete construction. That supply train was an industrial platinum mine. This is something never mentioned by Bill Beutel or Walter Cronkite in their moving blow by blow coverage of the War, or anywhere else for that matter. Toward the end of the summer of '68 my dad's dredge, The Jamaica Bay, was blown up by Charlie in an inner tube after a shaped charge was planted. They knew who did it because the culprit was cut in half with a 50 cal. as he paddled away just as the charge exploded. My dad was below deck, but made it to shore bare-assed but in one piece. Funny... they never met then, but my future father In law, George Zanghi, was a platoon leader in the 9th Infantry, on some occasions tossing hand grenades into the water as part of a guard duty mission protecting those dredges.

In the summer of '69 I was back up in Maine with my older brother Johnny who'd just done a hitch with the U.S. Army 2nd Armored Division. He was running around on '51 Hydra Glide, an old police bike. The kicker on this '51 was tired, but all it needed was a good push to get it running! I had lots of fun hanging on to the rail of the ripped up buddy seat. There were about a hundred skid marks from dumping the clutch VAROOM! at the bottom of the hill. 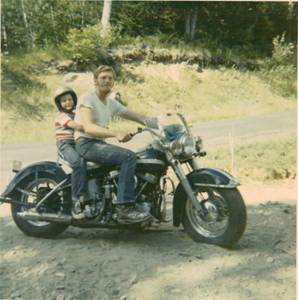 So many bits and pieces. For me a central thread was trying to make sense not of any of the described events -- I was only a kid -- but I could feel the impact they had on those I loved and respected. The seeds were planted. I've always had too many thoughts per square inch and was curious to know what made things tick. Of course I needed a narrative.

If reading the book A Clockwork Orange got me going, cutting out of school and going with my friends to Manhattan to see Stanley Kubrick's film in '74 really put the hook in me. The flow of images, the Korova Milk Bar, the old in out in out, actor Patrick Magee... Malcolm McDowell's narration especially got to me; it rivaled that of Lawrence Olivier's for the documentary series The World at War -- distanced, but with a real sense of human triumph and tragedy.

History really began to fascinate me. I wanted to know what motivated people and how they thought when Rome ran the show. By chance I met Snake from the Oak Beach Inn. He had a really cool used book store filled with dog-eared knowledge from the past, and one of the things I found was the Roman historian Tacitus, a Senator and Historian in the first century AD who wrote a piece called "Agricola." Agricola was a eulogy written for Tacitus' father in law, an eminent, well-respected Roman general. Basically it starts out saying "They just don't make men like Agricola any more. He was a just man, an honorable man." This goes right into "Today there is lawlessness in the streets and the youth have no regard or respect for their elders" and on and on...

Oh my brothers, a great piece, and very enlightening. Nothing has changed.

I have never quoted Anthony Burgess or any of his characters in the text of any of the songs that I've written, but as he helped me to make sense of it all, he is always there.

As an individual I am a pragmatist. Once I accepted the bargain I couldn't help but be an optimist. After all, no matter how bad things are, they can always be worse. We are all members of a team and need to rise to the occasion. Suck your gut in, take it on the chin -- is that all you've got? Keep your head down, keep swinging and keep smiling! Once you get passed this, every day and every situation has opportunity.